ST. ANTHONY'S CORNER OF MY WORLD 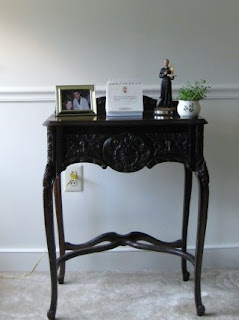 Over the last few years I have become familiar with the many writings and teachings of St. Anthony Zaccaria. Two years ago a Barnabite friend gave me a statue of St. Anthony Zaccaria. The statue has the Saint holding a crucifix of Christ Crucified in his right hand close to his heart. His left hand holds the Holy Eucharist atop a Bible, and near his feet is a medical shield to commemorate his years as a physician prior to becoming a priest. The statue is absolutely beautiful.
When I moved to a new apartment earlier this year, I knew that I wanted to give this statue a prominent place in my living room. I created a little nook devoted to St. Anthony. Gazing at the statue each day brings to mind St. Anthony's many fine attributes. For example, his energy knew no bounds and he was never too busy to help those less fortunate.
He persevered in the face of adversity. That is an inspiration to me when some of life's challenges seem overwhelming. Having the statue nearby, for that reason, has a calming effect on me.
The Saint's disdain for "lukewarmness" is another source of inspiration. Sometimes taking the easy way out of a difficult situation is very tempting to me. If I think of Saint Anthony, I'm reminded that we are all called to do our best in order to be worthy servants of the Lord. St. Anthony's deep, deep love for Jesus inspires me to be more appreciative of the friends and family who the Lord has placed in my life. These individuals help to make my life journey a little easier.
The statue is, and will remain, a very cherished possession.
By Fran Stahlecker
Posted by Fr. Robert No comments: 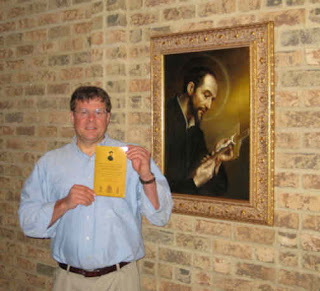 Mr. Greg Gambino, the layout artist of the English Edition of the Bull of Canonization of St. Anthony Mary Zaccaria, shows a copy of the document in front of the painting of St. Anthony, Patron of Physicians, at the Barnabite Spiritual Center in Bethlehem, PA.
Photo taken on May 5, 2009
Posted by Fr. Robert No comments:

The Original Bull of Canonization in Latin 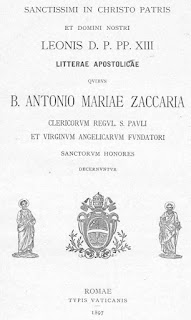 The cover page of the Bull 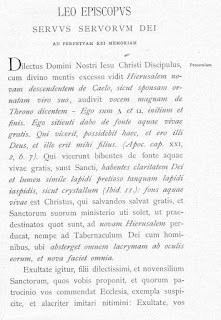 The first page of the Bull
Posted by Fr. Robert No comments: 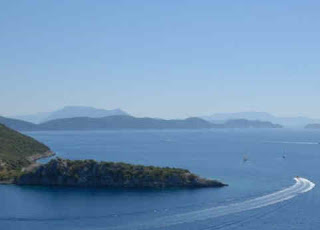 No man is an island,
entire of itself;
every man is a piece of the continent,
a part of the main...
John Donne, Meditation XVII
The body is a unit, though it is made up of many parts; and
though all its parts are many,
they form one body.
1 Cor 12:2
Dear Readers,
Without doubt it was Thomas Merton’s book entitled, No Man is an Island, which made John Donne’s expression so noted among general population. This insightful statement carries within itself a lesson to be learned for each of us, just as it was in my case while working on a project that I undertook.
It all started almost a year ago, in June 2008, when I was searching for the homily that Pope Leo XIII made during the canonization of our Holy Founder, St. Anthony Mary Zaccaria. I contacted my confrere, Fr. Filippo M. Lovison, CRSP who was stationed in Rome, for some direction on this matter. It was during my conversation with Fr. Lovison that I had learned about the Bull of Canonization of St. Anthony by the Supreme Pontiff, Leo XIII, entitled, Dilectus Domini nostri, and dated May 27, 1897. This was truly a great blessing and was an answer to my search. However, the document was in the original language, in Latin.  So then, I began to look for the person to help me with the translation. I communicated with our Provincial Superior in the North-American Province, Fr. Gabriel M. Patil, CRSP and asked for his assistance.  Fr. Patil in turn took upon himself the task to contact our confrere, Bishop Sergio Pagano, CRSP who is at present the Prefect of the Vatican Secret Archives, and requested him to have the document translated into English. Fr. Patil and I were also one in asking Bishop Pagano to write the preface to the Bull, owing to his expertise and his position as prefect. Bishop Pagano accepted our requests.
Regarding the translation, we learned that the search for a translator of the document had become a real hurdle almost impossible to overcome. In the final account, the document was translated only into Italian and not into English, as it was originally intended. And so the search for a translator continued.  Finally, Fr. Robert F. Slesinki, a friend of mine, who is in Connecticut, USA, agreed to translate the document into English.  At this time there was a need for the final work of editing and correcting the document.  For this delicate and vital task to the final presentation of the Bull of Canonization to be accomplished, I turned to my friend in the Philippines, an Angelic Sister, Sr. Rorivic Israel. Her editorial work was one of the final touches given to the final form of the document. Now I was left only with finding the person who would creatively and originally provide a graphic form to the document. Mr. Greg Gambino, who is another friend of mine, and who is a graphic designer, did the job, and did it excellently.
These people became instrumental to the completion of the project. From my experience of working with them, I have realized that any endeavor must be done with others. Indeed, no man is an island. I could have not accomplished this project had I done it all by myself.
To all of them, I am deeply grateful.
Fr. Robert B. Kosek, CRSP
________
Photo by Renata Bardecka.  Greece
Posted by Fr. Robert No comments: