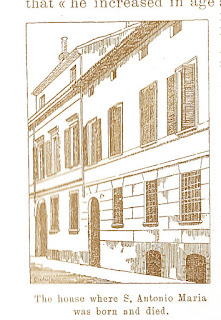 Anthony Mary was born in Cremona, Italy in early December of 1502 to the noble family of Zaccaria. His family had given the city over the years, no less than eighteen governors. His father, Lazzaro, died young when Anthony was still an infant.

His mother, Antonietta Pescaroli, a widow at 18 years of age, might have accepted any of the numerous suitors for marriage. With her great attractiveness, her gifted mind and vast wealth, there was every promise of a brilliant future ahead. However, she refused every offer so that she could devote her­self entirely to works of charity and the education of her son.
Anthony Mary fully conformed to the pious care of his mother and grew up a little angel. There was never a son more obedient and more inclined to piety than he. His biographers attribute to him what the Gospel according to Luke says of the Child Jesus, that he “…increased in wisdom and in years, and in divine and human favor” (2:52).
Charity for his neighbor, how­ever, seemed to shine especially bright in him. God had blessed him with such a sweet dis­position and a heart so full of com­passion for the needy, that they very soon be­came an everyday concern of his. The following anecdotes illustrate the tendency of the child to piety and his goodness of heart. 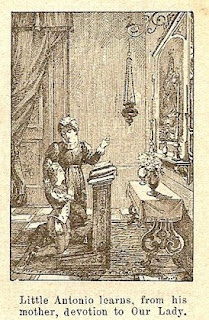 In his home there was a small chapel with an altar of the Madonna. Anthony loved adorning it in a manner inspired by his own devotion and appropriate to the feast celebrated by the church. He would go there with his mo­ther for morn­ing and night prayers. He of­ten spent long hours of the day and part of the night in devout recollection. The more the love of God increased in his heart, the more the desire to draw all hearts to God increased in him. From the desire to the act, in an ardent soul like his, was almost immediate. Our child soon became a little apostle. He took great delight in listen­ing to the word of God and meditat­ing on it. On his return from church he would gather the servants and others in the house into the little chapel. There, in a manner far beyond his years and with his heart burning with the love of God, he would repeat the truths he heard in the church, and on which he had meditated. His words bore good fruit, for his listeners went away deeply touched and filled with admiration. Let us see if that age of pride and immorality would destroy the plans of this new apostle in his adult years!
The second anecdote demonstrates Anthony’s love of the poor. 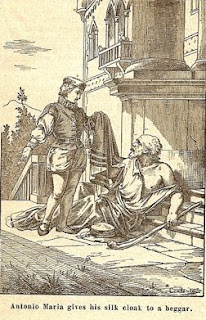 One winter day, returning alone on the road from the church, he met a poor half-naked beggar who asked for alms. The sight of the unfortunate man, whose teeth were chattering with cold, touched the child to the heart. But that day he did not have even a coin in his pocket, so he passed by with his head bent and his heart aching. He had only gone a few steps when he felt an inspiration from heaven and turned back. Approaching the beggar, he comforted him and then, making sure no one saw him, he took off his own rich silk coat, threw it over the beggar and ran home as quickly as he could. As he approached his home, he began to fear that he would be punished by his mother for having acted without her permission. But this did not happen! On the contrary, the pious mother listened, deeply touched by the account of what her son did and very gratified for this virtuous act. She praised him for it, and as a reward increased his pocket money, which he immediately contributed to the relief of the poor. From that day on the child seemed to live only to do good for the poor. Whenever he met those in want, he either gave them something he owned or took them home so that his pious mother might give them food and shelter.
Such unbounded charity towards his neighbor, combined with tender piety and a spirit of penance, which in time his mother was obliged to restrain, boded well for him, and like the relations of St. John the Baptist, all asked, “What then will this child become?” (Lk 1:66)
But the sons of the rich and noble, if they grow up without the intellectual culture suited to their status in life, notwithstanding the holy principles that have been in­stilled in them, often allow themselves to be conquered by their passions and abandon the path of virtue to tread the path of vice. Anthony Mary, strengthened by grace and already advanced in the path of virtue, would perhaps never have fallen away. Nevertheless, his mother, a woman of great understanding, wished to protect her son from every danger. Therefore, she enlisted the help of teachers highly knowledgeable in science and virtue to give the child an education befitting his status. After he mastered the first elements of Latin, Greek, and Italian and showed himself strong in virtue and firm in his Christian principles, she sent him to Pavia to study philo­sophy, and from there to Padua for the study of medicine.
One can readily imagine how many pitfalls might confront a youth in these universities who, noble, wealthy, and on his own, finds himself in the midst of such corrupt society. But Anthony Mary knew how to avoid every temptation and led as holy a life at Pavia and Padua, as he had led in Cremona up to this time. The school, his house and the church were the only places he frequented. His few close friends were all good. His best friend was Serafino Aceti, himself a young man of great virtue.
The frivolous and impious students did not fail to sneer at Anthony, calling him the “old saint.” But he let them talk and went on as usual without treating them any differently. On the contrary, by his politeness and gentle manner, he forced even the most wicked to respect him, and ended by gaining the esteem of all.
At age 22, Anthony Mary achieved his degrees in medicine, not, as was common in those times, by bribes and favor but by merit. Rich in science and virtue, he returned to Cremona in 1524. May our youths learn from his example, how they can be skilled in science and shine by their genius, without giving up their practices of piety and purity of life.
Posted by Fr. Robert