After a stay of about a month at Vicenza, Anthony Mary returned to Milan. Since the house near St. Ambrose where his religious lived was not large enough for the increasing numbers of the religious, clergy, and laity who flocked to the pious practices of their Institute, he began to look for a place suitable as a permanent abode for his Congregation. He had in mind the church of St. Barnabas and the neighboring houses. However, obstacles raised by the proprietors were so great that nothing could be done regarding the matter. It was only in 1546, seven years after the death of the saint, that they were able to purchase the place. It was bought by the Venerable Morigia, then superior. It may not be known by all that the Barnabites were so called from this their first permanent residence, St. Barnabas.
Anthony Mary, in the meantime, continued the works of his apostolate with ever-increasing energy. Foreseeing his end to be near, he wanted all his remaining devotion and strength to be used for the service of God. One could liken it to the toilers of the soil who towards sunset redouble their labors to complete the work imposed on them by the master of the vineyard.
The Countess Ludovica Torelli having for many years dealt with admirable patience the most unjust persecution from her relations was finally forced to sell her property of Guastalla to Ferdinando Gonzaga, brother of the Marquis of Mantua. This change of owners displeased the tenants and caused tension among them. The Countess asked Zaccaria's help, knowing well his ability in dealing with the most complicated affairs and knowing also the veneration in which he was held by the people of Guastalla. Anthony Mary started at once, arriving at Guastalla towards the end of May, 1539, where he was received by all as an angel of peace. He immediately ordered public prayers to implore help from heaven. In order to do the greatest possible good among the people, he resumed preaching, hearing confessions and all the works of charity that he had already done in other cities. So the people were not only pacified but crowded to him in vast numbers to hear his words, open their hearts to him, or ask advice. His influence over them was increased by an event which took place in the following way. 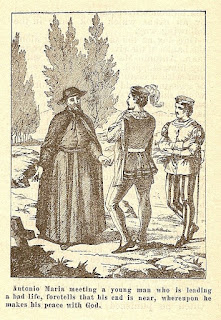 One day as the saint was going along the banks of the river Po, he met a young man. Anthony Mary, courteously greeting him, stopped, and fixing his eyes on him with a serious yet sweet look said, "I wish, my son, you would think well over the affairs of your salvation and arrange them while there is yet time, for my heart tells me you will die much sooner than you think." At this time the youth was in perfect health. Nevertheless, struck by this unexpected advice, he, there and then, made his confession to Anthony Mary with sincere repentance for his faults. It was good for him that he did. The next day he was called to appear before the judgment seat of God, having met his death by a terrible accident.
In this way Anthony Mary made himself everything to everybody by his ever-increasing zeal. But his body had become weak and languid. It must be known that to his labors, he added great mortifications, for not satisfied with taking very little rest at night, and even this little was taken on a hard board, he took so little food that he seemed to be on a continual fast. Often he punished his innocent flesh with hair shirts and disciplined himself to blood; above all, he did this when any new calamity befell the church or when he saw a soul in danger of being lost. At last, his strength exhausted, he fell a victim to his unbounded charity.
Being seriously ill, he was moved to Cremona to his mother's house. Here they used every remedy that art could suggest to preserve a life so precious, but he told them plainly that within the Octave of SS. Peter and Paul he would be called from this world. He said to his mother who was beside him, sad and weeping, "Do not weep, my sweet Mother, because before long" (as really came to pass) "you too will come to enjoy with me that eternal glory—that I hope (I am about) to enjoy." Hell attempted in these remaining hours a last assault, but after a long and severe struggle it was conquered once more; and God, as if to reward his faithful servant for the victory gained, sent him a sweet and consoling vision. In this vision, Anthony Mary saw the apostle St. Paul prostrate before the throne of God, praying that his life might be prolonged for the greater good of the Order founded by him; but the other Apostles had joined in an altogether different prayer and had obtained for him the favor of being quickly transferred to the glory of heaven. He saw then, across the veil of time, all that would happen to his Congregation, the severe trials that it would be subjected to, the hard struggles it would have to undergo. But he was consoled by God's promise that his Order should, by means of these trials, gain much. He related the vision to the Fathers Bartholomew Ferrari and Giambattista Soresina who had come from Milan to stay with him during his illness. Then with burning words he exhorted them to love religious discipline, to maintain peace and fraternal charity, and ever to advance in the love and fear of God.
On the 5th of July (Saturday afternoon), at the very hour when the first Vespers for the octave of the Holy Apostles were being sung in the church, as he himself had foretold, and after having received with the greatest fervor the Last Sacraments, the soul of Anthony Mary passed peacefully to God. He had not reached his 37th year! A life short in length, but long when we consider all he had done for the glory of God and the salvation of souls.
Posted by Fr. Robert