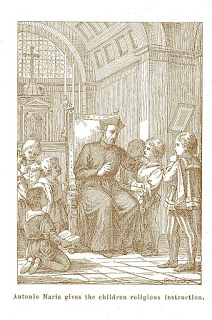 God granted Anthony Mary his years as a physician curing bodily infirmities in order that he might have a better insight into those of the spirit. These are much graver and require a prompt and effective remedy. But the time had come for him to take up the work for which he was destined, namely, the reform of morals. God, led him step by step as we shall see.
Anthony, who had a most sensitive nature and delicate conscience, began to fear that he might at any time be the cause of the death of others. This thought made him first suspend his medical practice and then entirely withdraw from it. The thought next occurred to him that he might sanctify himself better and be more pleasing to God if he were to work for the salvation of souls as a priest, thus devoting himself entirely to sacred studies and works of mercy.
But in his humility, he saw himself as unworthy of embracing a state of life which calls for such sanctity. In his confusion, he turned to God, imploring light and guidance from the Holy Spirit. He then opened his heart to Father Marcello, his spiritual director, explained everything, and asked for his advice. The latter asked for time to reflect and pray, and some days after said to him, “God calls you not to labor for the cure of the body but for that of souls. Go and prepare yourself by the study of the sacred sciences for the great mission God will entrust to you.”

The young doctor did not hesitate to obey, recognizing the divine call in the words of his director. He laid aside his medical books and devoted himself to the study of theology, the writings of the early Fathers, canon law and church history. He delighted, above all, in reading and meditating on the Epistles of St. Paul, and from these he drew the most efficacious arguments to excite in himself and others a fervent love for Jesus Crucified, the devotion so dear to his heart.
In 1528, at age 26, he was ordained. God’s deep love for Anthony Mary was shown by the following miracle. It was recorded by all the contemporary Cremonese historians and attested in the process of canonization. 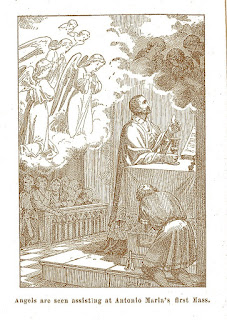 It was the custom in those days, as it is now, that a priest's first mass should be celebrated with great pomp and solemnity and that a banquet should then be given in the house of the newly-ordained. Anthony Mary, who disliked all show and pomp, requested that all exterior solemnities be avoided, for he longed to be alone to celebrate for the first time in quiet and recollection the Divine Mysteries. Absorbed in meditating on the great Sacrifice and his heart burning with love for God, he went to the foot of the altar. A profound and religious silence prevailed among those present, and all eyes were turned on him, a sign of the great event about to take place. At the solemn moment of consecration, a marvelous light encircled him and a multitude of Angels descended, and surrounding him, assisted reverently at the Mass. This heavenly vision lasted until the end of Communion. The joy and astonishment of those present can only be imagined. The report of the miracle quickly spread through the city and each one thanked God in his heart, sure that the new priest must be the angel sent from heaven for the salvation of the people and so, indeed, it proved to be.
Posted by Fr. Robert